Can Mere Numbers Prove The Existence Of God? 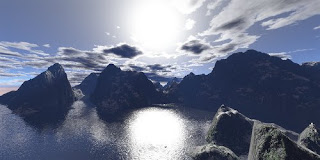 Introduction: The following scene relates a discussion between a Christian math teacher and his student. The student had asked the teacher for evidence for the existence of God. The teacher, being a dutiful Christian and a budding apologist, decides to explain the concept of “numbers” to the student.

The teacher wrote the number 1 on the white board.

Teacher (T): What is the number I have just written on the board?

Student (S): Eh, I don’t really know what you are driving at, but I guess it is obvious even to my pet parrot that this is the number 1.

T: Are you sure that this is the number 1?

S: I don’t understand you there.

T: You claimed that this is the number 1. So, if I were to use the cleaner and rub away this number 1, does the number 1 cease to exist?

S: You mean that what you wrote on the board merely represents the number 1?

T: Yes. The number 1 is a concept, an abstract idea to be exact. Numbers cannot exist in the material or naturalistic plane of existence.

S: So where do numbers exist?

S: I am beginning to understand what you are driving at. You are telling me that numbers can exist in minds, and I presume “minds” include the minds of men or human beings.

S: Alright. So numbers are ideas, and they can only exist in minds. So where is the evidence for God?

T: Be patient, my friend. Numbers are not only ideas or concepts, but are also immutable ideas/concepts.

S: Immutable as in unchangeable? Why so?

S: So I accept that numbers are immutable concepts.

S: This is difficult for me to grasp.

T: Let us imagine the very first man who used the number 1. Let us call him Dumbo. Dumbo was the very first man who wrote the number 1 onto the walls of caves. In fact, he did that to count the number of animals he had hunted thus far. Each time he killed an animal on a hunt, he went home and wrote a “1” on the wall. He didn’t know the numerical representation of the numbers 2, 3, or even 4, but he did know how to write 1. He added the “1”s up using mental arithmetic. Obviously, the concepts or ideas of numbers 2, 3, or even 4 were known to him. If not, he wouldn’t be able to add the “1”s up.

S: So how does that explain to me that numbers are eternal concepts?

T: If Dumbo was the first man who used the number 1, does that mean that the concept or idea of 1 didn’t exist prior to the existence of Dumbo?

S: Obviously not. The concept of the number 1 seems to exist apart from the mind of Dumbo.

S: So number 1 existed prior to Dumbo?

T: Well, if you were to destroy all minds (or all humans with minds) in this world, would the concept of number 1 continue to exist?

T: And if this world and this universe (or all matter) were to be destroyed, would the concept of number 1 continue to exist?

T: Or if space and time were to end now, would the concept of number 1 continue to exist?

T: If the concept of numbers ceases to exist, mathematical logic such as "1+1 = 2" will also cease to exist.

S: Sounds reasonable to me.

T: We also recall that numbers are concepts or ideas, and can only exist in minds.

S: So if all the minds in this world are destroyed, how can the number 1 continue to exist?

S: So what is this immutable, eternal, and transcendent mind?

T: I submit to you that this is the Mind of God, an immutable, eternal mind that exists outside of and beyond this world. And numbers are concepts or ideas that exist in this Mind of God. This philosophical explanation makes the most sense when explaining the concept of numbers.

S: This is a difficult thing to grasp, but let me think about it, and I’ll get back to you tomorrow.

Note:
Definition of “Transcendent”: A transcendent concept or idea is not dependent upon space, time, people, or matter. For example, the concept of numbers is outside of and beyond the world, of or relating to a spiritual or nonphysical realm.
This post is also posted on another blog.
Posted by vincit omnia veritas at 10:57 PM

The highest level math class that I ever took was two semesters of Buisness Statistics for my accounting degree. The professor for that class, when we were talking about Bell curves and normal distribution, said that it had been shown that the larger the population the more data from the population you plug in the closer to a normal distribution you get. He said that you could get a normal distribution evenutally out of a population that was not normal if that population was sufficiently large enough. He asked the class "Do you realize what this mean?" One guy said "Well, yes." He said "Are you sure?" I had talked to him before and I know that his is a brother in Christ. I think his point was that since even in random stuff like a population of data that did not fit normal distribution that eventually it would become normal that proves there has to be a logic behind the numbers. It's like Paul said in Romans 1. Everything in creation testifys that there is a God.

great post. May I link to it? Well done. thanks.

Thank you for your encouragement and thoughts.

Thank you for your kind words.

I Kings 7:23: And he made the Sea of cast bronze, ten cubits from one brim to the other; it was completely round. Its height was five cubits, and a line of thirty cubits measured its circumference.

Really? Or was the verse meant to inform us the value of the circumference as measured by the Israelites?

I believe you would know how to google using the following "I Kings 7:23 pi".

Or just copy and paste this meta:

Or better, go to the library and read:

PS: I like your blog. It's as informative as your personal profile :P