The Burning Fertility Clinic: An Argument for Abortion? (A Note)

The Independent posted a news article some 2 years ago. It reads, “A Twitter thread that undermines the core argument against abortion has gone viral causing a stir from those on both sides of the debate.

Science fiction author and journalist Patrick S. Tomlinson challenged one of the central notions used by ‘pro-lifers’ that life begins at conception, and that therefore, a human embryo holds the same value as a human child. 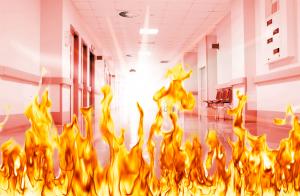 Speaking to his 25,000 followers, Tomlinson says that a decade ago he came up with a scenario which shuts down the idea, and that in all that time he’s never had an honest answer.” (Taken from the Independent).

Tomlinson boasted on his Twitter account, “Whenever abortion comes up, I have a question I've been asking for ten years now of the 'Life begins at Conception' crowd. In ten years, no one has EVER answered it honestly.”

Here is his alleged ethical dilemma for the Pro-lifers:

"You’re in a fertility clinic. The fire alarm goes off. You run for the exit. As you run down this hallway, you hear a child screaming from behind a door. You throw open the door and find a five-year-old child crying for help. He is in one corner of the room. In the other corner, you spot a frozen container labeled ‘1000 Viable Human Embryos.’

The smoke is rising. You start to choke. You know you can grab one or the other, but not both before you succumb to smoke inhalation and die, saving no one. Do you A) save the child, or B) save the thousand embryos? There is no ‘C.’ ‘C means you all die." …

No one believes life begins at conception. No one believes embryos are babies, or children. Those who claim to are trying to manipulate you so they can control women.” - Patrick Tomlinson (original quotation with spelling errors corrected).

The following are the primary fallacies of his analogy:

1) Failure to make the In se (“in itself”) /In re (“in the thing”/In the matter of/with regard to) distinction.

From the rescuer's perspective, relational and/or family ties, the viability and life prospects of potential rescuees, the excruciating suffering the rescuees would undergo if not rescued etc are considered in the decision as to who to save.

Succinctly put, in comparison to the child, the embryos are less likely to survive as viability chances are low in IVF. The child could have formed relational ties with many other human beings and relatives, and this might affect the triage decision. The child would suffer great physical and mental agony, while embryos do not experience pain at this level of development.

2) This is a triage situation; doctors have to make similar ethical decisions all the time. It doesn't mean the other patients do not have moral value!

Medical officers during wartime also make such decisions with mass casualties. It doesn't mean the other soldiers aren't worth saving. It just means that resources are limited, and complex ethical decisions have to be made based upon several factors other than the moral value of the rescuee.

Personally, if I can only save one person from a burning kindergarten, I will save my own daughter. It doesn't mean all the other kids are not worth more than a dime. It's just that in such situations where only a limited number of lives could be saved, we have to make choices (and quickly!) based upon numerous other factors.

It does not contradict the conviction that each embryo is a living, distinct and whole human being.

This analogy by Tomlinson discusses WHO TO SAVE, NOT WHO TO KILL. This is an essential distinction.

If I save my daughter from a burning kindergarten, it doesn't mean I will slit the throats of all the other kids on my way out! I am choosing who to save in that nick of time. I am not deciding upon which child I should kill.

Abortion concerns who the mother and the abortionist want to kill. This argument posed by Tomlinson is ultimately an ignoratio elenchi, an irrelevant conclusion from an irrelevant analogy.

4) The analogy actually argues against the Pro-choice position.

If the embryos were actually potted plants or Pokemon figurines, there wouldn't be any dilemma at all. It goes to show that the embryos have moral value, and that's why Tomlinson intuitively felt that Pro-lifers would have an ethical dilemma in such a scenario.

5) Furthermore, in this analogy, the Pro-choice mother and the Abortionist can be likened to the arsonists who started the fire in the lab. In a pregnancy, no one has to die! Why start a fire at all?

So, here is a lesson for Tomlinson: Committing arson is malicious, destructive and wasteful, irrespective of whether the embryos have any intrinsic value or whether the Pokemon figurines are collector’s items for that matter. Likewise, irrespective of your perspective concerning the moral value of an embryo or the pre-born baby, abortion is malicious, destructive and wasteful because it kills life.

The consensus amongst embryologists is that the zygote is life. This analogy does not present an argument for abortion, but against it.

Tomlinson has shot himself in the foot, and is hoisted by his own petard.
Posted by vincit omnia veritas at 4:56 PM No comments: