After a long break away from Plantinga’s arguments against naturalism (see here and here), we now return to the last two options available for Neo-Darwinists concerning the conditional probability P(R/N&E). For those who are not familiar with this: Plantinga’s argument against naturalism form part of the Transcendental Argument for the existence of God (or TAG for short) popularized by Greg Bahnsen and some other presuppositional Christian apologists. I believe TAG is one of the best arguments for the existence of God. Nevertheless, the atheologists (e.g. Michael Martin) have likewise come up with their version of the Transcendental Argument for the Non-existence of God (TANG). 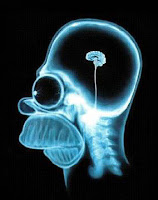 In this instance (contrasted with option 2), beliefs are both semantically as well as syntactically efficacious in producing a certain behavior in Harry the hominid. However, the behavior is maladaptive. If, however, beliefs – even if they are true – do indeed produce maladaptive behavior, it is clear that such beliefs confer no selective advantage on Harry and his hominid friends from the evolutionary point of view. In fact, it is very plausible that these hominids are better off without these beliefs. Again, P(R/N&E) would be relatively low.

4. Causal Beliefs that are Adaptive

Finally, it could be that the beliefs of Harry the hominid are indeed both causally connected with their behavior and also adaptive. In other words, such beliefs directly result in a specific behavioral response, which is adaptive for life and therefore, preferentially selected by the raw chance of evolution. What, then, is the probability that the cognitive faculties of Harry and his hominid friends are reliable? Not very high actually.

This is because beliefs are not exclusively causative for behavioral production. A combination of beliefs, desires and other miscellaneous factors (e.g. emotions, psychosocial factors) within an organism result in a particular behavior. To simplify the issue, let us just take these two factors: beliefs and desire. An infinite number of belief-desire combinations are capable of producing a particular behavioral response in Harry.

Let’s consider Harry in the evolutionary tree of life. The Tyrannosaurus Rex is not exactly his friend, and high on the food chain. Let us suppose that for survival reasons, Harry has to avoid the T Rex. Perhaps, and let’s just say perhaps, Harry believes that the T Rex is hostile, and he desires not to be eaten by it. Therefore, he displays T Rex avoidance and runs away from it. That is just one possibility. But there are likewise an infinite number of other possible belief-desire combinations to elicit that particular behavior i.e. running away from the T Rex.

Therefore, taking in account these infinite number of belief-desire systems or combinations, the probability of R – for Harry and his hominid friends – is relatively low, and surely less than ½. Similarly, it is very reasonable to think that P(R/N&E) for humans is low. And if we accept N&E, this gives us a defeater for our belief in R – the reliability of our cognitive faculties. With a defeater for our cognitive system, there is at least a reason to doubt it, or to be agnostic with respect to it. And as Plantinga has said, “If R is unlikely or improbable given the way our faculties have come to be, then we have a reason to reject or withhold R.”

This is obviously a very rough estimate for P(R/N&E), and some might disagree that we can know P(R/N&E) for certain. So the correct attitude for us is perhaps agnosticism; in other words, P(R/N&E) is inscrutable and we just cannot tell what that is.

Therefore, if we believe that humans are a product of evolution independent of the guiding hands of God, the correct attitude for us to take regarding R should be one of agnosticism, to say the least. Since P(R/N&E) is either low or inscrutable, we have a defeater for R if we are to accept N&E.

PS: To be concluded in the next post.
Posted by vincit omnia veritas at 4:13 AM No comments: