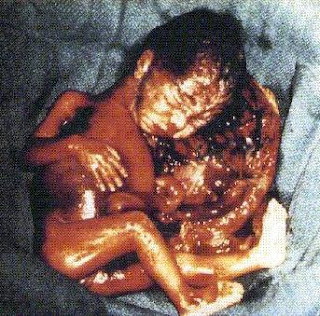 The following is an informal reply to Dr Phua Dong Haur’s letter in Straits Times forum, “Banning abortion will create more problems (Aug 1).” The original writings of Dr Phua is in italics.
I REFER to Ms Tan Seow Hon's comments in 'Time for Singapore to relook abortion law' (July 24).

Although it is true that some legislation should be examined periodically to assess its current relevance, Ms Tan's arguments as to why we should relook the abortion law is one sided.

Fallacy of poisoning the well. You should show how her argument is “one-sided.” Disagreeing with your point of view does not imply that she is being “one-sided.” Isn’t your emphasis on the mother’s choice (i.e. pro-choice or pro-termination) extremely parochial and one-sided as well? (And the one-sidedness of which I will show in the following paragraphs).

The key issue here is whether non-therapeutic abortion “simpliciter” is morally/ethically right or wrong. If non-therapeutic abortion is morally wrong, then both backstreet and “legalized” abortions for non-lifesaving reasons are wrong. This is the key issue which you should address first. Avoiding the relevant ethics of abortion only makes one’s arguments (if any) appear fatuous and misinformed.

Likewise, the danger or existence of backstreet euthanasia doesn’t make euthanasia morally right, right? Do we legalize euthanasia simply because they are patients doing it illegally (and of course, with the adherent or accompanying risks of therapeutic failure and complications)?

Dear Dr Phua, the fallacy you have committed is called the ignoratio elenchi. Your argument (thus far) does not even begin to address the central ethical issue of abortion; you have merely argued for its utilitarian value for the mother alone.

Backstreet abortions are done using dangerous techniques or oral ingestion, and they often result in injuries or death to the woman. If medically supervised abortions are banned or made difficult to access, women who want or need an abortion and are unable to travel overseas to do it, will inadvertently turn to backstreet abortions. The result will be tragic.

Your argument fails even the most simplistic of informal logic; therefore, I will not take the time here to discuss utilitarianism with you.

Form of your argument - If A, Then B.

“If medically supervised abortions are banned or made difficult to access (A), then women will inadvertently turn to backstreet abortions (B).” (If A, then B).

Valid forms include – A, therefore B.

“If medically supervised abortions are not banned or made difficult to access (not A), then women will inadvertently not turn to backstreet abortions (not B).”

So is it justified that we deny the “right to life” to a child in order to satisfy the whims of the mother? Your statement begs the question, “Why does the mother want an abortion in the first place? Is the requirement therapeutic in nature i.e. to save the mother’s life” She would not be endangered in any way if she chooses not to have an abortion for whimsical reasons. Also, is non-therapeutic abortion ethical for any reason at all?

What so perplexes me is your apparent duplicity in arguing for the denial of the “right to life” of the child, and in the same breath, claimed that “the life of the fetus needs to be protected.” How so? By dismembering the child via abortive techniques? Indeed, the child needs to be protected from paralogisms originating from illogical minds. 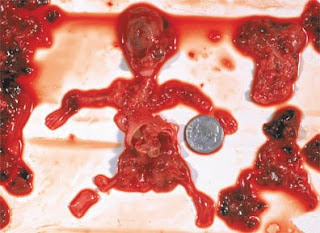 Hence, I would argue that the decision to go for an abortion or not, should be left to the woman and the woman alone. This is because she is the one who has to bear the emotional and physical burden, and responsibility of either the pregnancy or abortion. It is not anyone else's place to decide for her, as long as she is mentally competent to make such a decision.

A non sequitur. If an action is inherently unethical or immoral, then society has the right to administer judgment and the necessary legislation. The autonomy of an individual cannot be divorced from societal considerations.

The “right to life” of a child (or any patient) must always be considered in such ethical debates. In the same vein, the “mental competence” reasoning can be used to justify all forms of voluntary euthanasia – it is, after all, the dying/suffering patient who has to bear the main “emotional and physical burden” of the illness/sufferings.

Autonomy must be subjected to and balanced with the other guiding principles of medical ethics - justice, beneficence and non-maleficence. And one of the responsibilities of being a doctor is to save life, not destroy it. This is basic “non-maleficence” as stated in the Hippocratic Oath, “I will prescribe regimens for the good of my patients according to my ability and my judgment and never do harm to anyone. To please no one will I prescribe a deadly drug nor give advice which may cause his death. Nor will I give a woman a pessary to procure abortion.” I guess the Oath is now only repeated as a lip-service to your alma mater. Besides, most abortions are not performed to save a patient’s life.

The rational approach to the dilemma of abortion is not to disallow women to make their own choice, but to educate the public on proper methods of birth control, and alternative avenues other than abortion in an unwanted pregnancy, for example, adoption.

The approach to reducing abortion rates is in education and not legislation.

A false dilemma. The approach to reducing abortion rates is in education AND legislation (and many other means).

Finally, I would like to add that relooking the abortion law is not the method we should adopt to increase the birth rate. The idea is to make people want to have more children and enjoy having more children.

Making abortion illegal or difficult to access certainly does not increase the desire or enjoyment of having more children.

What about the “right to life” of every human being which you have so conveniently ignored in this discussion?
Posted by vincit omnia veritas at 10:54 PM

I'm not ashamed to say (now, at least) that I was party to an abortion and it still gnaws on me sometimes; so it's just not women who suffer some level of distress from such an invasion, but men too.

Perhaps I'll share that one day... and hopefully Christians who support the pro-choice agenda can re-examine their stands.

Wah liao! You commented like 5 minutes after I posted this ... :P

Hey, thanks for sharing your very personal experience. You don't have to ... :)

We know what abortion is about, there is no need for images like that. Not only could they be offensive to some, but personally I find it very painful, looking at the 2 helpless, murdered children.

I am sorry if these photos offended you.

As my blog is read by some non-Christian friends and colleagues, I am hoping that these graphic "reality" will give them a better idea what abortion is truly like ... and what "pro-choice" means - the choice to do this to their own (and other) children.

If women and their partners had the opportunity to examine the abortus, I believe there would be much fewer abortions in Singapore.

But as long as the fetus is perceived to be just a "lump of tissue," abortion will continue to be widely practiced. This is why pro-choicers vehemently oppose any attempts to provide women with scientific, unbiased information on fetal development.

Sometimes God gives people over to their sins. Evident in our society today don't you think? Because women (and men) insist in having abortions, singaporean society has given us Singaporeans over to our immorality and inhumanity. Dr Phua's response is typical.

Reading this article makes me wonder how this person with his lack of logic ever became a doctor. He must obtained (a) Phd after ramming his head against a wall (PhD = Permanent head Damage) or whatever.

Makes me think that becoming a doctor is (any kind - im not fussy)gonna be a real piece of cake - I just have to be really stupid and illogical.

Oh i forgot to add that i must be heartless too.

So as long as i chop my head and heart off i can pin a badge on my shirt and call myself Dr.

The pictures are indeed grotesque, but they are in fact needed to make a point. To decide to censor images based upon how horrible they are means that we cannot adequately portray any number of events including the Holocaust mind you. Art (generically) after all is meant to do something, and horrible images are not by fiat considered "haram". Hey after all, in old time society and villages, young children take part even in killing chicken and ducks etc on a regular basis without batting an eyelid, so why the squirmishness over bloody images?

And yes, Singapore is becoming more decadent by the day ... BTW, this Dr Phua works in Tiny Tots Slaughter House (TTSH) A&E. He's an associate consultant. I respect him as a fellow colleague, but I have to disagree with his arguments.

I agree with you here, Daniel. I was also thinking of the same example i.e. the pictures of Jews in extermination camps and all those bloody images crossed my mind.

I guess some folks (like some of my own relatives) cannot bear such images ... and I sincerely regret the negative effects. I do hope that the images do provoke some to consider what abortion truly is - murder.