Of Paradoxes and Pastoral Theology

They fashioned a tomb for thee, O holy and high one
The Cretans, always liars, evil beasts, idle bellies!
But thou art not dead: thou livest and abidest forever,
For in thee we live and move and have our being.
– Epimenides, Cretica

Ever heard of the falakros paradox or the paradox of the bald man? Here goes, “Is a man with one hair on his head a bald man? Yes, then what about two hairs on his head?”

The paradox can be presented as a formal argument with logical structure. For example, we may peruse the following soritical argument in its common form:

Such paradoxes are also known as sorites paradox (named after the Greek word for heap - σωρός or soros).But before anyone thinks that such paradoxes are just word games, let it be known that such “games” had led to much debate amongst logicians and to the writing of several prominent works by some of the best philosophers in history (e.g. Quine, Russell, Frege, Wittgenstein etc). The paradox is a serious problem because it introduces a tension between classical logic and mathematical reasoning; it also points to problems in the philosophy of language, that is, the “vagueness” of predicates in natural language.

Now here is the interesting bit. What has the sorites paradox to do with the Bible and theology?

Paradoxes are apparently found in the Bible as well. The Liar’s Paradox thought to have originated from Epimenides of Crete was studied intensely by medieval logicians. This is found in Titus 1:12 of the New Testament:

One of the Cretans, a prophet of their own, said, "Cretans are always liars, evil beasts, lazy gluttons." (Titus 1:12, ESV)

So what has the presence or absence of paradoxes in the Bible to do with theology? We know of a very fundamental protestant position on Scripture known as the doctrine of the perspicuity of Scripture. This doctrine of the clarity of Scripture (often called the "perspicuity of Scripture") teaches that "the meanings of the text can be clear to the ordinary reader, that God uses the text of the Bible to communicate His person and will." "The witness of the Church throughout the ages is that ordinary people, who approach it in faith and humility, will be able to understand what the Bible is getting at, even if they meet with particular points of difficulty here and there." (Theopedia) 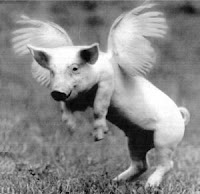 Obviously, if Scripture ought to be clear, logical (i.e. follows the laws of logic which is in the Mind of God), and capable of communicating unequivocal meanings through propositions, how do we as Christians view the presence or absence of paradoxes within Scripture? My position is that, no true paradoxes are ever sanctioned in Scripture. Even in the case of the Epimenides Paradox, the paradox was merely quoted by Paul. God does not communicate to us with paradoxes in the Bible because if He does, Scripture is no longer clear or perspicuous.

In view of the perspicuity of Scripture, I would like to think that even if paradoxes apparently exist in the area of theology, particularly pastoral theology where Scripture must be applied to life and practice, it must be due to a lack of in-depth study or an alleged “vagueness” of certain biblical terms that should be defined further. As a general rule, we shouldn’t introduce paradoxes into Scripture with our hermeneutics. Usually, such paradoxes are brought in to confound the issue, and not to resolve it. I am convicted that scriptural injunctions are never paradoxical, illogical or equivocal in view of the clarity of Scripture and the logic of God’s Mind. Furthermore, if paradoxes are unresolved in the area of biblical studies or doctrine, then it is quite impossible for a Christian to make sense of such biblical teachings.

With regard to our recent discussion of the Christian homemaker, it seems that the adherence to a paradoxical definition of the term “homemaker” is a preferred option for many interpreters of the Bible. Please do allow me to illustrate the problem or paradox here.

Working for 1 minute a day as a waitress does not make the homemaker a waitress.

And we have only 1440 minutes or 24 hours a day, everyday of our life - a tautological but needful reminder.

In the area of fashionable designs and clothing,what are the exact “modesty” parameters for the Christian? For example, how short must it be for a skirt to become too short? Or how low must the neckline be before it becomes too low?

Again, we can introduce a sorites paradox to confound the teaching of Scripture; this seems to be the expertise of many teenagers when they protest against their Christian parents.

A skirt that covers 100% of the legs is modest enough for Christian teenagers.

The “homemaker” or “Christian modesty” is not the issue of discussion here. But I believe the reader can see that it does not make any sense to say that a mother is a homemaker no matter how long she works outside as a waitress. Neither can we say that a “skirt” that does nothing to cover the legs is modest even by pagan standards.

The intention of one who asks - “Where do we draw the line here?” - is perhaps not one which can be easily understood. He could be a sincere seeker trying to understand the clear teachings of Scripture; in this case, he is a neophyte in the things of the Lord, and a disciple of Jesus. Or he might be confused by contemporary notions and culture; in this case, he needs to exegete Scripture with Scripture using the analogy of faith. But there are some who clearly understand what the Scripture says. However, certain doctrines are not so palatable for the carnal mind, and they seek to introduce a paradox into Scripture where there is none.

In accordance with the Reformed Faith, it is my conviction that Scripture is perspicuous. As such, it is quite unimaginable that God would have left us with paradoxes within Scripture or in vital Christian doctrines.

Nay, there shall be no paradoxes and dialectical truths found in the Word of God.
Posted by vincit omnia veritas at 5:22 PM

Vincent
I, too, am of a Reformed perspective regarding theological things. I would aprreciate your opinion on something. I would agree that the Bible is clear in it's teachings but there are some that are difficult to reconcile, such as divine soverignty in election with regards to salvation and the responsiblity of man to repent. To my mind, which is not as sharp as I'd like it to be, that looks like a paradox. If God is soverign (and He is) how can man be responsible since he can't choose differently than God has elected? Like I said, I'm in total agreement on the fact that Reformed theology appears to be the correct way to approach scripture. I was just curious of your opinion on what looks to me to be a paradox.

I wouldn’t put the issue of divine sovereignty and human responsibility in the area of theological “paradoxes.” Perhaps a better question to ask ourselves would be, “Does human responsibility mandate ability?” For example, are we as humans (or God’s creation in His image) responsible to keep his moral law? If so, then does that imply or mandate that we are able to keep the moral law? Of course, it does not follow.

None of the aforementioned positions are theologically viable.

Finally, are Men able to repent apart from God’s enablement?

Something further for us to think about: is the Incarnation a logical paradox? What is your opinion on this i.e. how can God be both fully human and fully God at the same time?

This is going to sound pretty unintellectual. Honestly, with regards to the incarnation I am not able to explain it in terms of logic-How can Christ be God and man? I, therefore, accept the fact that, while I am unable to explain it, the Bible reveals it to be true and it is therefore true. My inability to understand it fully is something I would account for as part of my fallen, sinful nature and that because I still live in this unredeemed body in an unredeemed world I cannot understand it. However, when I get to heaven I will be able to understand it because I will have a glorified body and mind.

I'm sure that sounds like a cop out but honestly I do believe there are some things that we are not able to fully understand about God as humans.

As for the Incarnation and the (alleged) existence of true paradoxes, I would take this opportunity to recommend Thomas Morris' excellent book, "The Logic of God Incarnate."